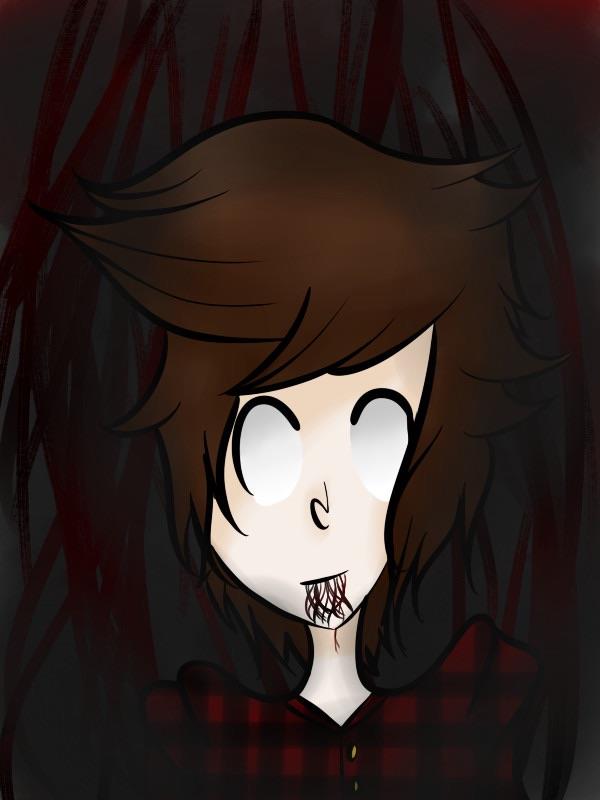 Sunlight hit my eyes the next day asI woke up, looking around with hazy vision. The first thing I noticed was my mirror was on the wall opposite of it’s original position.

“That’s strange…” I mused. I was sure that I had it on the other wall, but I brushed it off as a misplacement and proceeded to throw some random pieces of clothing on myself.

School would start this morning, seeing as how dad had taken care of my registration online last night. I was very excited to start my Senior year of high school today, brushing out my long, rust colored hair.

I set down my brush, looking at myself in the mirror. My green eyes looked like emeralds. Hopefully this school would be different than the last.

I thought it over for a moment. The girl that no one even noticed.

It seemed like a great title to me. If I were invisible, then I would have nothing to worry about!

I picked up an apple, gliding out the front door, backpack in hand. Today was going to be my day.

My day went smoothly. Well, as smoothly for a new girl as it could go.

People asked me questions, talked to me a bit. Most of all, they were friendly.

Everyone seemed to be on eachother’s side. No onetried to insult me, no one tried to start a fight.

This was definitely the school I wanted to go to for the rest of my years.

The whole entire place seemed to have a positive attitude; somehow it seemed a bit off to me though. I didn’t want to admit it, but deep down inside, I knew something was wrong, something seemed weird about the place.

Everyone was a bit too happy, which seemed to make my little brother uncomfortable.

Walking home with him was always a blast. He would tell me everything about his day, and about all of his bullies, but today was not one of thosedays.

“I feel uncomfortable around the other students. They scare me with how happy they are all the time, it’s like they don’t know what sadness is.” His voice was bland, a little fear hinted in it.

I heard a horn,and the screeching of tires, looking across I saw my brother, and a car speeding towards him.

I knew it was the endfor him; I was going to see his guts all over the place soon, along with his blood, splattered all over the white Kia.

I cried out, trying to run after him, but someone was holding me back!

I was about ready to faint when I saw something from the corner of my eye. My brother was tackled to the ground by a tall, figure, with what looked like rusty brown hair, and a redplaid shirt.

The car went about five feet past where my brother had been, and then stopped.

I could hear frantic people, someone on the phone with nine-one-one, another trying to calm me down, as I was in tears at this point, my vision blurry, as I took note of how close that was.

Realization then took over, he wasokay, and I was just light headed by the adrenaline rush.

The ambulance arrived, looking over my brother, as I was sitting on the old, worn down curb of the sidewalk.

“That was close, huh?” I looked up to see the man- no, wait. Helooked like he was about eighteen to nineteen, getting ready to sit down beside me.

I recognized him instantly, the rusty brown hair, and the red, plaid shirt. It was him! The one who saved my brother!

“Are you the one who saved my brother?” I asked him, smiling gently at him.

“Oh, I’m Sarah!” I quickly took his hand, shaking it as I introduced myself.

I didn’t know exactly why they wanted me at the hospital, but for what I was told, they wanted to ‘check my mental health, to make sure I was alright from what about happened’, though I wasn’t really in need of any help.

My parents and I sat at the table, not saying anything after that. We hadn’t talked all night, only at the hospital when we had been questioned by dad.

My mother was probably the one who had the worst emotional damage. She had sat up in her room, crying for three hours, father hadn’t even bothered to check on her, saying that she needed to ‘cry it out’.

I’ve never seen her so upset before. With no words said, we all went to bed. Well, at least tried to get to bed.

With all the thoughts of what could’ve happened still racing around in my head like I was part of some sort of race track, it was hard. With a little effort, though, I eventually drifted off into sleep.

Something made a huge sound up above me the next morning.

My vision was hazy, as I tried to get up, ending up tripping and falling over in the process. It was the start of the weekend, and my brother, mother, and father was going to a psychiatrist today.

I refused to go, saying that I was perfectly fine, although in reality I wasn’t. What had made my brother do that yesterday? He refused to speak to me, even after the incident was over.

I found it strange; he always talked to me, even when he was scared to death, or had done something wrong.

Another bump in the attic made me jump out of my previous thoughts as I walked up towards the stairs. After successfully climbing them, I looked around.

Nothing was there. I scowled, looking around once more.

I found a box that had tipped over, and another that was teetering, hitting the side every so often.

We had stacked these boxes well, so there was no way that that could’ve happened over night.

I glowered once again. We may have an unwanted guest in the house.

I was always into the ghost stories they played on TV, and never thought that I would ever be living in a ghost-infested house until now.

That explained the things that happened in the house, but what about my brother? What had happened to him? Something spooked him, I know that’s for sure. I just need to find out what.

I stepped back out of the attic, going over towards my bedroom.

Last night, I had acquired Matt’s number. He told me if I ever needed help, that he was just a phone call away, I just hoped he was up. I picked up the phone, putting in the digits, as the phone rang three times, before he picked it up.

“It’s me, Sarah. I was wondering; can you come over for a while?”

“Yeah, sure, just let me get dressed and I’ll be right over.”