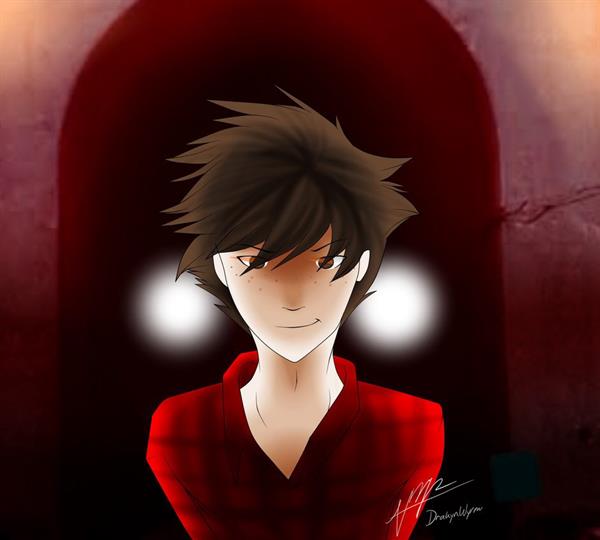 “It’s me, Sarah. I was wondering; can you come over for a while?”

“Yeah, sure, just let me get dressed and I’ll be right over.”

“Thanks.” I hung up the phone, setting it back down by my bed side. I was extremely happy that he could come over and help me with this.

He had said that he lived in this town as far back as he could remember, and had access to the old articles in the newspaper office.

Well, he had been the photographer for the newspaper at one point, so they still let him in.

Photography was just a hobby for him, now.

I quickly guided my thoughts to getting possible records on this old house. I knew there was something up.

Maybe the house burned down, or maybe it was built on a burial site. Whatever it was, I had to get some information on it!

I heard a knock on the door, racing down to get it. Once I opened it, I saw Matt’s dirt brown eyes, and that wicked grin he held.

He was leaning ever so slightly on the door frame, leaning down to me. “What is it you needed? Some company, a boyfriend?” He winked at me.

“No! You’re just a hopeless flirt, aren’t you?” I made a playful scowl, looking past him to his car.

“I need records on this place. I think it may be haunted by ghosts.” He laughed at me. “Well then, do you have everything you need, princess?” He emphasized the word ‘princess’ as another one of those smirks came into play.

“Yes, I do. And please don’t call me that, or any other weird pet name.”

He sighed, looking around, “Fine, let’s go then.”

I walked off the steps, change jingling in my pockets. Matt went around to my side, opening up my door, “Are you sure you don’t want to take up my boyfriend offer?”

I slammed the door in his face, hearing him mutter something by the like of ‘picky, picky…’ under his breath. I simply giggled. I could get used to this guy.

The hours we spent were countless, looking through book after book, online article after online article, archive after archive, nothing showed up though. I couldn’t wrap my finger around it though. This made no sense. There should’ve been at least something on this house, seeing as how we found much information on all of the other houses in the area.

“I have to go to the bathroom, I’ll be back!” He announced walking off towards the bathroom. I sat there for a while, as an old woman decided to sit down behind me. “Excuse me, miss, but were you looking for information on that house on Fir Villa drive?”

“No time to talk. Here, just take this.” She scribbled something down on a piece of paper, walking out of the shop as she did. I stuffed it in my pocket, deciding to not tell Matt.

“Man, those bathrooms are clean. I just love the smell of coffee once you walk into a bathroom, don’t you?” I laughed, looking back up at Matt.

Luckily, I had left a note at home, telling my parents where I would be, if they needed me, and to call my phone if they needed me. My phone never went off once though, so I presumed that they hadn’t needed me. Matt finally drove me home around six-thirty, waving goodbye from his car as he backed out of my driveway. His car raced down the road, went into the small tunnel, and seemingly vanished into the darkness.

I walked into the house, smiling at the feel of having a new friend who loves to help me.

The weeks went by, as Matt and I searched more.

Things started to get creepier, and creepier though.

When I got back the first night, I had had dinner, and went straight to bed. I had awoken sometime in the middle of the night, needing to go to the bathroom.

I had walked in, and turned to the mirror, as I usually did, since I was in fact a vain person. I always cared about my looks, no matter who was going to see me.

I gulped, trying my best not to scream, there behind me was my brothers bloody corpse, hanging from the ceiling.

I swallowed all f my bile, his lifeless body just dangling in mid air.

I closed my eyes, telling myself not to look, but when I opened them again, he was gone. I looked back to see nothing was there.

I went back to my room after that, brushing it off as being ‘too tired’.

One day I woke up and my entire room had be rearranged. Some things lay astray on the floor, and others, where moved from where the were supposed to be.

It took me the rest of the day to get my room remade.

The next thing was even stranger.

Matt and I had just come back from looking around in the library.

He was always so chipper, eager, and excited to help me.

I walked into my room, to find the words in blood ‘Stop looking!’ on my wall, which I immediately started screaming about.

My parents, and my brother ran into my room, trying to calm me down, but it wasn’t working. I kept screaming, and crying, even though it wasn’t there anymore.

I was starting to think that I was going crazy. My head hurt regularly, and I called Matt often in the middle of the night.

Much more happened, from more ghostly figures appearing, and whispers telling me to ‘stop looking’. I was starting to think that the place truly was haunted.

I will never forget the day I lost everything.

Matt and I had just finished, yet again, searching through the last archive in town, with no luck at all.

He drove me home, not saying anything on the way. He walked me up to the steps, smiling as he said his goodbyes, and walked back to his car, driving off.

I opened the door, and called out to my parents. “Hey! I’m home!”

Nobody answered me. I walked around, looking for them. The house was bare, like no one had ever lived there before. I felt a sick feeling as I ran upstairs.

My room was completely empty, I ran all through the house, the last place I looked was in the bathroom, where some sort of red liquid was smeared onto the mirror, a phrase that I will never forget to even this day; “I lost everything, now you have too!”.

I quickly looked around, grabbing the slip of paper that I had stored in my pillow case. On it was a number, which I picked up my phone, and dialed.

The phone rang twice, before an automated message started to play.

“Hello there, if you’ve found this number I assume you need information on the house you are living in.”

“This house was built years ago, but burned down due to an accident, the only survivor lost everything, and his name was Matt Bridle. After he lost everything, he committed suicide by sitting in his car, with the engine turned on, and a plastic bag over his head, his car on the train tracks as he was crushed by the train.”

“If you are living in this house, you are urged to leave immediately, as his ghost still haunts the place, taking away the loved ones that anyone has-“

The phone suddenly died on me, chilling laughter emanating behind me. I turned around to see Matt, only his eyes were rolled back into his head, causing them to be completely white, and blood along with some sort of sticky looking black substance was pouring out of his mouth. “You should’ve left when you had the chance.” His voice wasn’t happy anymore; it was rough, and hoarse. I screamed running as far as I could. He disappeared, and reappeared in front of me, tripping me as he grabbed my ankle.I‘m Batman！

“Awe, come on! Don’t be that way! I’m sure I could use a new friend!” I kicked him in the groin, getting loose for a second. I screamed, hoping the neighbors could hear me.

“Shut it!” he hissed, punching my jaw, just about breaking it. My lungs burned, I could barely breath. I had a will to live though, live and tell my story.

I kicked him directly in his nose, causing him to howl in pain, as he walked backwards tumbling into the wall. I took the chance to run as fast as I could, up and out the door, down the side of the road, and to the police station.

Matt appeared in front of me again, backhanding me as I feel on the cold pavement. He continued to drag me towards the train tracks, laughing violently all the way.

I was a crying mess, doing everything in my power to break free.

“Matt! Why are you doing this?”

“I lost everything, it’s only fair that you should too!” He laughed again. I shuttered.

How could such a kind guy be so, so, evil? Even if he was a ghost! He was still supposed to be my friend!

I kicked him again, as he fell onto the train tracks.

The train rushed by, and he was gone. He just disappeared into thin air.

It’s been three months since that happened. My family was never found.

The people in the town say that they only remember me, yelling at a fictional little boy, telling him to get out from the road. That night, I moved, as far away from the town as possible, not even wanting to remember the horrible things that happened there.

I’ve always tried to tell people about Matt, but no one listened! They all call me crazy, someone even called the cops on me, trying to get me put into an insane asylum. It never worked though. I was left with only my thoughts, as Matt had truly, taken away everything I’ve ever loved.